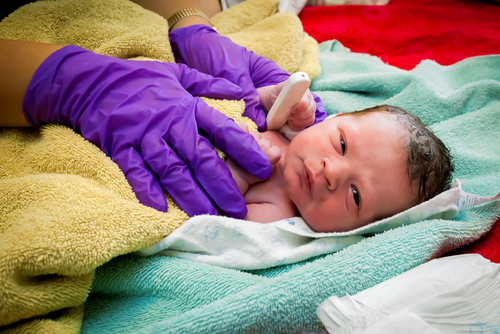 A child who barely moved in the womb in the final months before his birth and then had multiple bone fractures at birth was diagnosed with spinal muscular atrophy (SMA) type 0, researchers reported.

The case study, “Type (0) spinal muscular atrophy associated with fractures at birth,” was published in the Journal of Clinical Neurology.

Symptoms of SMA, depending on a patient’s specific disease type become evident in the days, weeks, or years after birth. But in its most severe form,  called prenatal or type 0 SMA, can be evident in a fetus.

Researchers in India described the rare case of a boy born with symmetrical fractures on his humerus and femur — the long bones in the upper arm and upper leg, respectively.

Such fractures at birth are unusual, and his doctors initially suspected osteogenesis imperfecta, a genetic disorder that results in improper bone formation and weak bones. Other problems were also evident.

The pregnancy was relatively uneventful, although the mother noticed little fetal movement toward the end of the third trimester of her pregnancy, a period that stretches from week 28 to birth. An ultrasound at 38 weeks of gestation found she had polyhydramnios, or an excessive amount of amniotic fluid around the fetus.

The baby required intensive care, including ventilation for severe asphyxia, at birth. He didn’t seem to be able to move on his own, and doctors found signs of severe muscle degeneration, as well as improper formation of the head and hands.

These findings were consistent with a diagnosis of SMA, which was confirmed by genetic testing that found the infant had mutations in both copies of SMN1 gene.

He died 73 hours after birth due to multiple organ failure resulting from respiratory and other problems.

This baby was a fourth pregnancy for the family.  A healthy child, now 8 years old, is the couple’s first child; but babies born in the second and third pregnancy also died in the first hours of life.

With an SMA diagnosis confirmed, the parents were counseled about the possibility of the disease affecting infants in future pregnancies, and the need for prenatal screening.

Researchers suggested that SMA type 0 should be considered as a diagnosis when clinical features like poor fetal movement, polyhydramnios, and fractures at birth are evident. But, they also concluded, this case “is different from previous case reports of SMA Type 0 due to the presence of fractures at birth.”